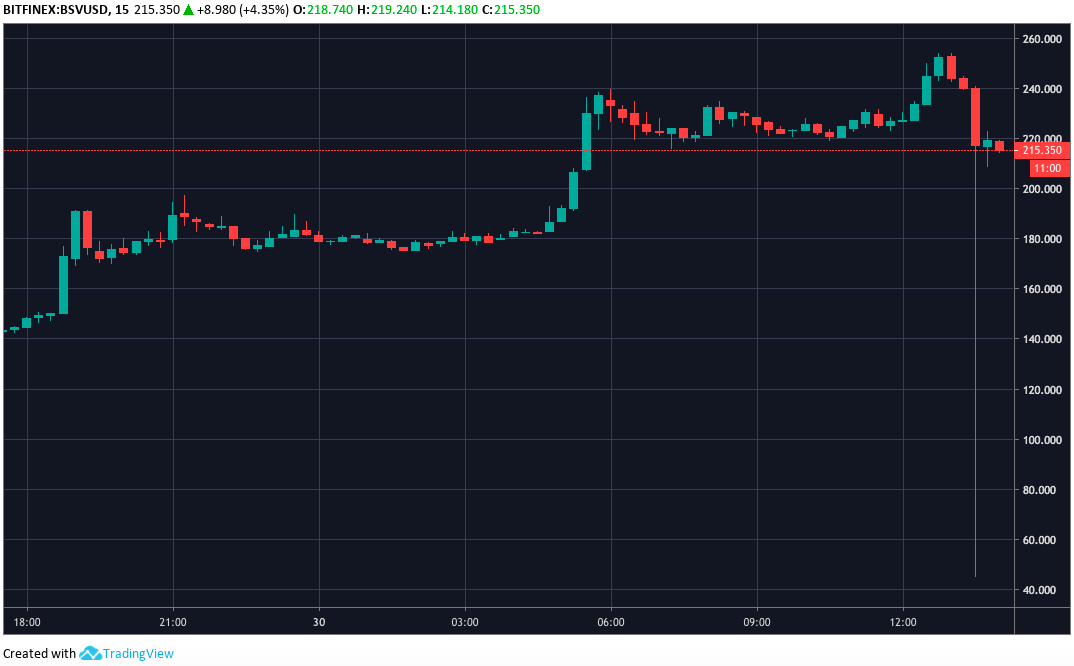 According to CoinMarketCap, at press time, the cryptocurrency was trading at $217.70 with a market cap of $3.877 billion. The trading volume of the cryptocurrency was $2.198 billion and the coin had recorded a significant drop of over 13 percent in the past hour. Nevertheless, the coin still recorded a massive gain of over $120 percent over the past seven days, gaining by more than 70 percent over the last 24 hours.

The reason behind the crash was attributed to a market dump by Alistair Milne, a well-known Bitcoin influencer. Milne revealed on Twitter that someone dumped around 25K Bitcoin SV on Bitfinex. He tweeted,

“It is a long that just closed and triggered some margin calls with it. Check out the BSVUSDLONGS chart.”

Interestingly, the coin was on an upward trend prior to this crash, becoming the largest gainer among the top ten cryptocurrencies. The surge, which began yesterday, placed the coin in the eight position in terms of market cap as it gained over $1 billion in a short time period.

The reason for the coin’s massive surge in the past few hours was speculated to be “fake news” surrounding Craig Wright. The news claimed that Wright had transferred around $50k Bitcoin to Binance, thereby proving that he was Satoshi Nakamoto. Subsequently, it was claimed that BSV had been re-listed on Binance, and an apology by Changpeng Zhao to Wright had been issued on Twitter.

“Don’t trade shit coins on margin… 90% of the book is from market makers. if they remove their buys or sells the book is empty. exchange scam like bitfinex calculates the book, and sells short to trigger the domino effect and buys way lower”

Binance Announces Its Next IEO, but Its Last IEO’s ROI Raises...

‘Iron Crown’ Solo Mode Proves There’s an ‘I’ in ‘Team’

Bitcoin (BTC) Price Analysis: Bulls Refuse to Back Down