Deposits to the ETH 2.0’s deposit contract have grown considerably over the past few days, which witnessed the most growth since the contract launch recently. 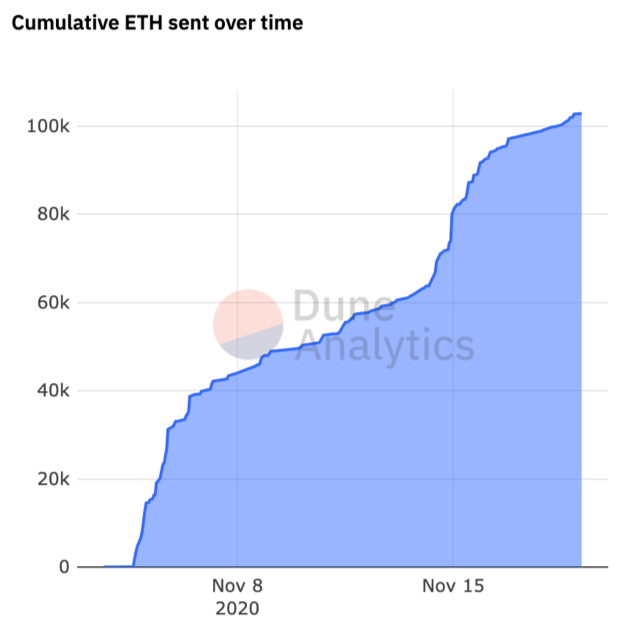 Over 102k ETH has now been sent to the ETH 2.0 deposit contract, however, despite this, considering the current pace of staking, many remain uncertain that the target of 524,288 ETH from 16,384 validators can be reached by November 24.

In an Ethereum Foundation AMA on Reddit, developers posed a question to the community as to why they remain reluctant to stake ETH.

“A question from us to the community: if you haven’t already made deposits, what is holding you back and are there changes we can make to make validating more appealing?

The primary list of issues summed up was the lack of the ability to withdraw ETH, uncertainty as to the genesis date, and the fear of losing capital due to technical issues.

On the issue of the lack of ability to withdraw, one user stated that,

“I am personally waiting for RocketPool, and RocketPool is waiting for you guys to implement the withdrawal feature. Everyone else I am sure just doesnt want to lock up their ETH without being able to take it out, especially when some of them will be incurring tax events while they are staking and will have to find a way to pay those taxes even though their money is locked up.”

RocketPool has announced today that they are moving the beta from Medalla to Pyrmont testnet and expect it to have a lifespan of several months, while also lowering the minimum amount of ETH required for staking to be eligible for a reward from 32 ETH to 24 ETH.

Given the recent momentum in price, staking 32 ETH is not an easy ask for a validator to face.

As one user commented,

“I’ll probably be depositing. I would really like to participate and I have everything set up and ready. But there is this lingering doubt, that I think it’s just based on the fact that 32eth is now about $15k. That decision is something I really need to think about, I don’t feel in a rush to come to a decision.”

For stablecoins like Tether, is its main ‘usefulness’ to facilitate crypto...

Tesla Could Miss Model 3 Delivery Targets. Here’s Why It’s Not...

Tagomi begins client trades in cryptocurrency including bitcoin and ether

Ethereum, XRP, BTC and Litecoin deposits to be accepted on Binance.US...