Crude oil recorded a historic drop by 99% on April 20. This sudden fall has added to the difficulties caused by the COVID-19 crisis especially in countries where fuel accounts for more than 90% of total exports like Iraq, Kuwait, Venezuela, Israel, and Saudi Arabia. 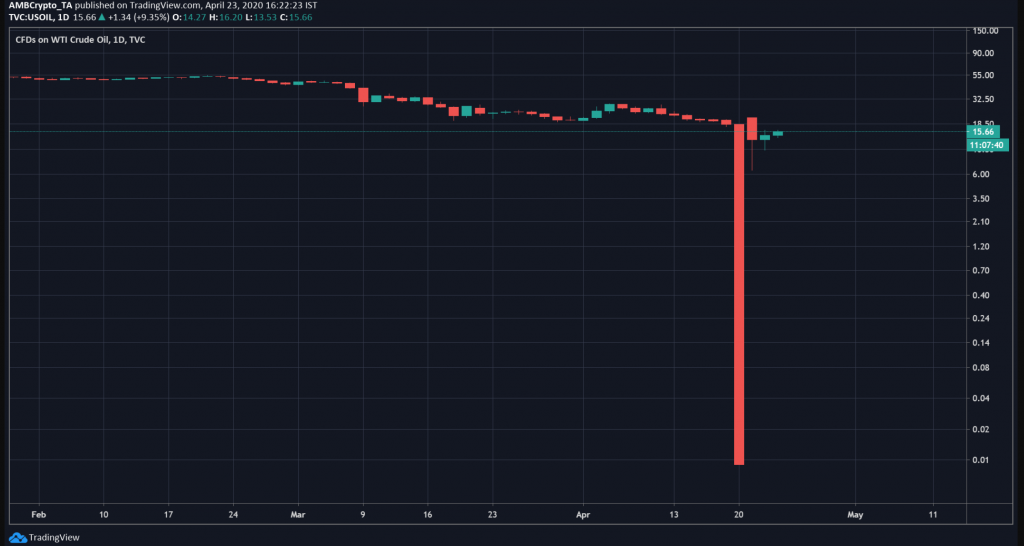 As traditional assets are correlated, gold and SPX were affected by this sudden drop. But a look at crypto markets revealed that Bitcoin also recorded a drop by 4.9% on April 20; the coin’s price was rejected at $7,200. At press time, the King coin was trading at $7,089.78.

This continued correlation of Bitcoin with traditional assets puts the future of cryptocurrency at risk. Bitcoin’s 50% drop on March 12 had raised serious concerns around the coin’s safe-haven narrative and the April 20 drop has further strengthened these concerns.

Following the BTC drop, famous analyst John Bollinger tweeted that Bitcoin (BTC) and altcoins were currently approaching a “squeeze territory.” He also pointed out that crypto traders must be ready for another significant correction in the coins’ price which was right around the corner.

Christopher Brookins, CEO of Valiendero Digital Assets in a recent podcast shed light on the crypto scene in countries like Isreal, Venezuela, Saudi Arabia, and other countries that specifically depend on the revenue from oil. In fact, in recent times, there has not been much news around the crypto scene in these countries, however, the Israeli trading platform eToro in an email to its clients noted that Bitcoin barely flinched as negative oil prices sent shockwaves through traditional markets. “In relative terms, Bitcoin has held up very well,” the platform stated.

On the other hand, Commodity Futures Trading Commission Chairman – Heath Tarbert also commented on the fluctuating oil market and predicted that the markets [both traditional and crypto] were simply reflecting the volatility that is present in the economy.

World’s Oldest Watch Manufacturer to Use Blockchain for Tracking Timepieces

Venezuela to Use Petro Cryptocurrency in International Oil Trade