[updated Dec 14, 2018] At the time of writing, Dash is the 16th largest cryptocurrency by market cap, with a total value of US$515 million. Dash price currently sits around $62, joining other coins in being about 90% down from its all-time high. We’ll look at what’s happening with the Dash ecosystem, and trading charts to make our Dash Price Prediction for 2018 and beyond.

The aim of Dash is to provide a fast, borderless, untraceable currency for transactions. It achieves this through two features – “InstantSend” and “PrivateSend”. By default, these features are off. Users have the option to enable or not.

Dash has made traction as both a transactional currency and a privacy-centric coin. It is often named along with Monero and Zcash as one of the most prominent privacy coins.

Dash has a unique opportunity for coin holders. Instead of mining coins like one would with Bticoin, Dash offers a system of masternodes—allowing holders to earn passive income. Find out more in our Guide To Dash Masternodes.

In terms of Dash price, masternodes are an important element in the ecosystem because they ensure that a significant amount of Dash coins are not going to be for sale. They’re locked into the masternode system, paying out holders (you can read more about payouts here), but also creating a relative scarcity for Dash coins. If and as Dash gets more buyers, demand mixed with this scarcity can shoot Dash price up even further.

Of course, there’s still a lot to learn about Dash’s mining operations as well, which you can find out more information in our guide to Dash mining.

Opportunities for Dash Price In 2018

This year has seen a massive correction on the crypto market with all crypto coins losing value. Dash has lost over 70% of its value from the peak price of $1642 in December 2017.

Now trading near $154, there are reasons that Dash could rise back again, starting with the $200 area. This will be the reasons for a rebound based on moves, though technical analysis will show us that these will need to be a major influence.

The Dash Community Is Getting Stronger

Recently, DashRoots announced the launch of its platform. It will help individuals and teams have greater access to funding by the Dash community.

Martin, one of the founders of DashRoots, says the platform helps people at the grassroots level to bring their talents and skills to Dash. It happens by helping crowdfund their ideas directly from the Dash community.

He adds that the Dash treasury is a crucial part of the network. It enables evolution, but sometimes it’s too expensive to fund small ideas. It’s this area that Dashroots will aid the most. Helping people raise smaller amounts to bring their skills and ideas to the project at the grassroots level, “where small things can turn into big things.”

This kind of activism could see Dash come to the forefront of crypto adoption, going beyond innovative ideas like the SMS-based wallet it launched in Venezula.

There was a recent study on cryptocurrency transactions which found that Dash was one the most used currency in making small trades. It’s something that indicates its real-world use as money. The study involved collecting data from top cryptocurrencies from BitInfoCharts.

It was then used to establish statistics and trends that infer the nature of economic activity across different networks. The findings make for an exciting read. The stats show that Dash has consistently maintained a low average and median transaction values. Therefore, Dash is mostly used for retail purchases and other similar purposes.

Merchant data from Anypay also support the hypothesis. Also, Dash transaction volume data has remained constant despite that of other cryptocurrencies declining since the speculative winter bubble.

It indicates the increase in merchant transactions that counter the drop in speculative trades.

The Dash project is seeing new collaborations that aim to push for mass adoption of the crypto coin. Recently, the platform entered a strategic partnership with CoinCola – a Hong Kong-based crypto exchange as it starts operations in Venezuela.

Full details about the partnership can be found in our coverage here.

In a bid to increase the flow and accessibility of virtual currencies in South America, the exchange will add Dash coin on their OTC platform. They will also offer zero percent trading fee for all transactions involving Dash until October 31st, 2018.

The exchange also has a Refer a Friend program that will see Venezuelans earn 50 percent commissions for trades completed through the program.

This collaboration will bring in more users to the crypto platform hence boosting its price soon.

The long-term chart of the DASH/USD pair is shown below: 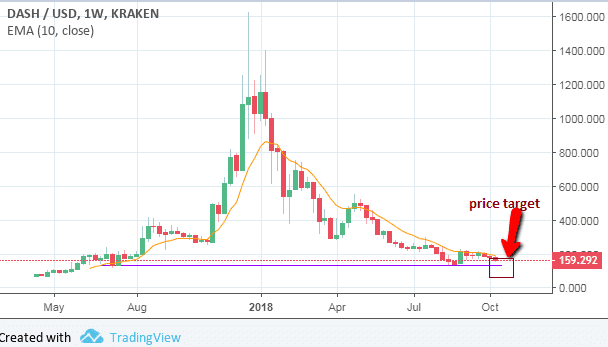 The chart shows that the weekly candle is presently trading lower than it opened for the week, with prices pushing towards the support line which is identified in the chart below as the 1st price target. Here are the possible scenarios as to how this setup is going to play out in the next few weeks.

The crypto market entered a period of sell-offs, starting from overnight trading hours on Wednesday. As such, nearly all top 20 cryptocurrencies by market capitalization lost ground significantly, led by Bitcoin. Price action had already found resistance at the descending upper trendline, and is expected to reach the first support line at $147, which is shown on the chart below as the first price target. 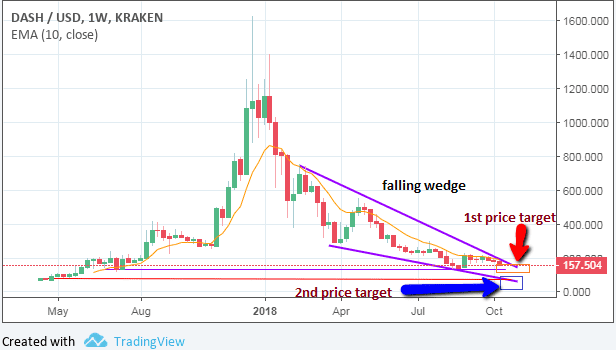 If this support line is breached, then the door will be open for price action to attain the 2nd price target, which is the site of the lower horizontal support line at $67. If this price move occurs as stated, it is going to take several weeks to play out.

The second scenario will have to consider the falling wedge seen on the chart. This pattern is still in evolution and is still a long way from resolution. However, the expected resolution of this pattern (a bullish breakout) will be under consideration when the price action bounces off the lower wedge trendline. Incidentally, this line interacts with the 2nd support line at some point. It is possible that a bounce from this point of intersection will be the fulcrum that will favorer the upside reversal. It must be said that any possibility of an upside reversal must be supported by very strong positive news in the market. With the current negative market sentiment, it is difficult to see this coming anytime soon.

It may be more rational to speak of price action trading between the two borders of the wedge pattern. Traders would be best served trading this range using the prevailing market sentiment. If the sentiment is bearish, it would make better sense to sell on the rallies, provided Dash price does not break out of the confines of the pattern.

Here is the long-term, medium-term and short-term outlook of Dash price for the DASH/USD pair.

Disclaimer: this analysis was done on a weekly chart. It takes a whole week for a candle to form, so these moves may take several weeks to play out. Entries should be made on shorter time frame charts such as the daily chart.

The charts are showing a bearish tendency for DASH (in its USD pairing), so, unfortunately, it looks like 2018 might not be kind to the coin. If this is the case, we’re looking at a DASH price nearer to $150 than moving back toward the $250 range and beyond. The silver lining here is that interested long-term parties can gain a portion or a whole masternode at a cheaper price if they’re interested.

Still, as detailed above, there is hope and optimism within Dash. It doesn’t appear to be correlating to investor interest and strong support lines in the charts. So, Dash price might see a brighter 2019, but for now, we’re not calling any prices above where it’s at now (especially in BTC ratio, which could increase USD price, but not ratio).

Lastly, if you’re looking to buy (or trade) your Dash, you can do so on many exchanges. We recommend trying out Kucoin. You can find a guide on how to do so here (note: we do not own this guide).

Eric is a cryptocurrency writer and editor. He has written on emerging technologies for over seven years and has accrued over 2 million page views. He also runs the paid Coin Agora community. He is currently working on his first novel, which involves a cryptocurrency start-up.

Nike (NIKE) Set to Release New Smart Shoe That Can Be...

Bitcoin is getting outperformed with a positive feedback loop cycle

Report: More Than Three-Quarters of ICOs in 2017 Were Scams