A lot of attention has flocked into Bitcoin recently, with the world’s largest digital asset trending again after its much-anticipated halving. However, this was not due to a technical update or price surge, but for the fact that the world-renowned author of the Harry Potter series, J.K Rowling, expressed her interest in understanding Bitcoin.

Crypto-twitter got right to the task; from Brian Armstrong to Binance‘s CZ, everyone tried to explain Bitcoin in native terms to the beloved author. In fact, Tesla’s Elon Musk also got involved to give his views on the crypto-asset. However, at the end of it all, J.K Rowling failed to grasp the concept clearly.

This indirectly highlighted the fact that Bitcoin still had a long way to go in terms of adoption and awareness. It underlined the fact that in spite of its growth, a vast majority, just like J.K Rowling, probably don’t understand Bitcoin. The aforementioned scenario led to this tweet by Gabor Gurbacs of VanEck.

#Bitcoin isn’t for everyone and that’s okay. Only roughly 1% of portfolios hold #gold and gold market cap is in the $8 trillion range! It’s not absurd to believe that Bitcoin will go to the trillions range even with moderate adoption.

There is a certain degree of truth to Gurbac’s tweet. 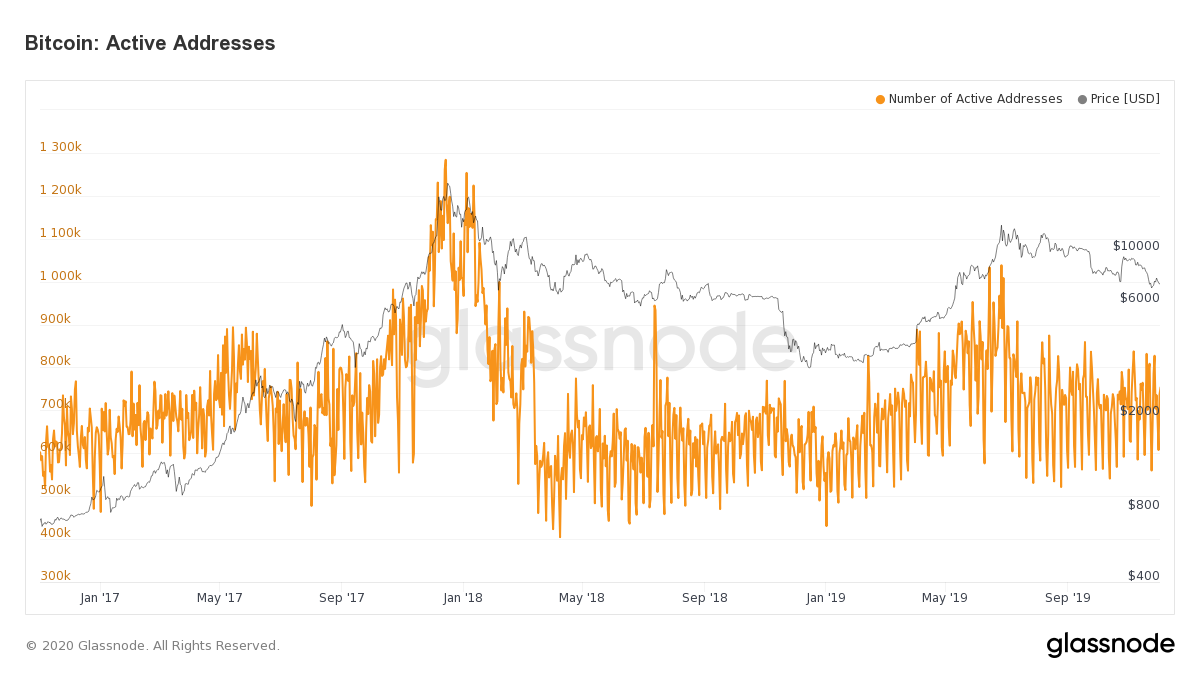 If we rewind the clocks to 2017, a time when Bitcoin reached its all-time high of near-$20,000, it can be observed that the number of active addresses peaked at that time. The amount of adoption that took place during that time was immense, but it is important to note that at the time, institutions were yet to take any interest.

The next thing you know is Bitcoin fell down by 90 percent as higher rates of activity did little to save Bitcoin’s plot in the industry. A point can be made that since 2017, the number of Bitcoin addresses with more than 0.1 BTC has significantly improved. It should be noted, however, that institutions have started coming in as well, a development that has been a major turning point for Bitcoin since the start of 2018.

Now, an elevated level of adoption would have taken place in the industry if Bitcoin’s utility as a medium of exchange would have improved. Sadly, very little development has been made on that front and its Store-of-Value characteristics are way more amiable to the industry.

In fact, Bitcoin is seen as an investment vehicle, rather than a form of currency, and this is where the institutional interest comes in.

Since mid-2018, institutional investors have been taking the value of Bitcoin seriously, and 2019 was the year of the derivatives market. With a high influx of accredited investors, something that is evident from the increased level of interest on CME and Bakkt‘s recent inclusion of 70 clients, major capital is going to flow in.

It is also important to note that since institutions started getting involved in crypto, especially Bitcoin, the crypto-asset has been less susceptible to the levels of depreciation that were seen in 2017. This indicated that serious backing in terms of capital does help the world’s largest digital asset maintain its position at a higher price range.

Hence, it is very possible and relatively agreeable to say that Bitcoin will reach a trillion-dollar market cap with moderate adoption because even though Bitcoin will be in the hands of a few, these investors or institutions will be holding a lot of it.

William Mougayar: The SEC Does Not Really Know About Crypto

Top 25 SLP (Speech Pathology) Podcasts You Must Subscribe to in...

51% Attack Might be Approaching Bitcoin Cash Network, and Here’s Why

Why network fees are floating?

How Will E*Trade Handle Cryptocurrency Fees?