Bitcoin could be in for another significant price surge based on the current trading trends. The top-ranked cryptocurrency has managed to stay relatively stable even while the altcoin markets experience a post-weekend trading decline.

Massive Short Squeeze on the Horizon

One of the more defining aspects of the BTC trading narrative in 2018 has been the activities of shorts. 2018 has seen a significant increase in Bitcoin shorting where traders bet that the BTC price will fall.

Throughout August 2018, Bitcoin shorting rose to almost reaching the April 9 all-time high (ATH) signaling the fact that many traders don’t expect the top-ranked cryptocurrency to stay above $7,200. Even more profound is that in early April, BTC was trading at $7,000.

With so many Bitcoin shorts, the BTC price could surpass $7,300 with $7,500 a likely resistance level. Whether it maintains $7,500 or not would depend on the level of bull fatigue. A few short squeezes have happened in the last few months due to the high volume of short trading positions.

The likely reason for this next short squeeze is due to unprecedented levels of “short absorption” in the market. These absorptions are mostly unleveraged meaning that bulls (most likely whales) are making real BTC purchases at 1:1 U.S. dollar ratio. Thus, even though the shorts are making concerted efforts, the most probable market response in the interim is upward price movement. 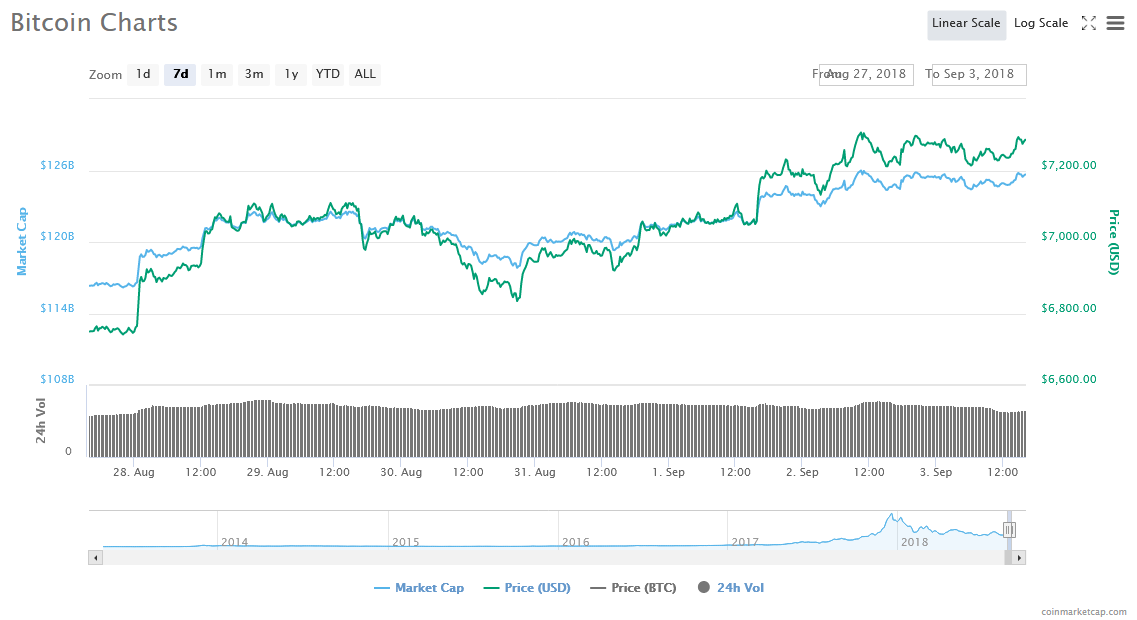 This imminent short squeeze comes as Bitcoin has been growing steadily over the last seven days. In that time, BTC has increased by eight percent as the top-ranked cryptocurrency sets its sight on maintaining the $7,000 price level.

While Bitcoin has remained relatively consistent, the altcoin market has been tumultuous, increasing in tandem with BTC but also experiencing constant pullbacks. Despite these pullbacks, the total market capitalization has climbed to $236.9 billion.

Do you think a massive Bitcoin price short squeeze is imminent? What is your end of September BTC price forecast? Let us know your thoughts in the comment section below.