Disclaimer: The findings of this analysis attempt to foresee Bitcoin Cash’s [BCH] price movements over the next 24-hours.

Prominent Bitcoin fork, Bitcoin Cash [BCH], may have managed to form a different chain due to differences, but its correlation with Bitcoin has ensured BCH’s price remains stagnant too. Even though Bitcoin Cash has managed to recover from the Black Thursday sell-offs, its price has been bouncing within the same $220 – $224 zone for a while now.

Given the strong correlation between the two crypto-assets, a bullish move in the Bitcoin market could trigger positive movement in the Bitcoin Cash market too. However, Bitcoin’s price has been dealing with a lot of immense bearish pressure lately and according to the attached chart, the correlation between the two has been dipping since mid-May. Falling correlation indices could help the coin break out of the rut it finds itself in. 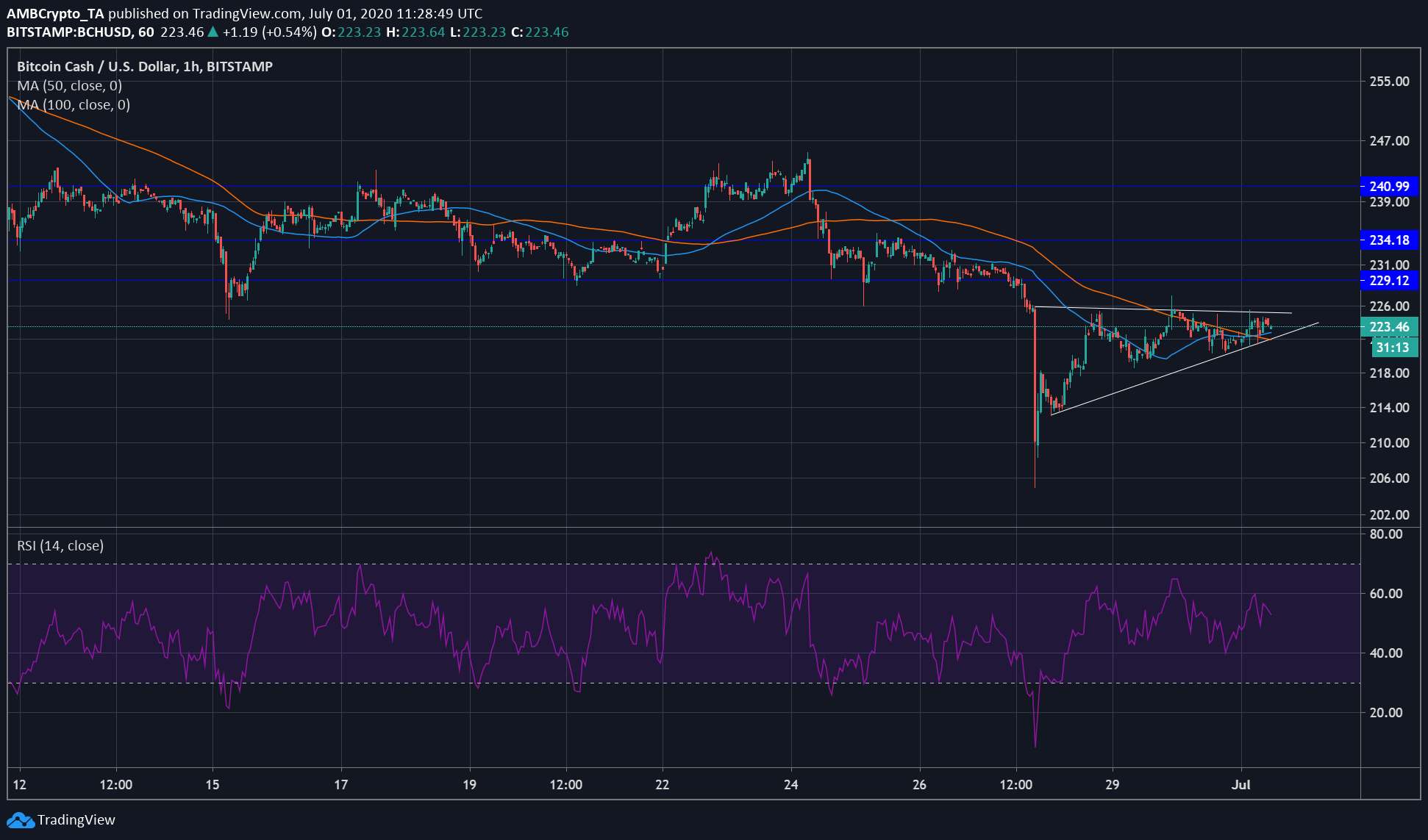 Bitcoin Cash was trading at $223.05, at press time. This price point was very close to the support offered by the formation of an ascending triangle pattern. However, the daily moving averages were supporting the bullish movement of the coin. The 50 MA [Blue] had slipped under the candlesticks a few hours ago as the price moved upwards. Similarly, the 100 MA [Orange] also snuck under the price candles on the charts.

If the price of BCH trends any lower, it will receive immediate support from the 50 MA at $222, and if the price sinks further to $221, the 100 MA might contribute to the price bouncing back. Even if the price is unable to reverse the selling pressure, the ascending slope may prevent it from plunging any further. The price of BCH may test the waters a few times, before registering an upward price trend.

The Relative Strength Index was in the seller’s zone at 40. However, a sharp rise to 60 was noted hours later as the coin moved into the buyer’s zone. At press time, the RSI was at 50, signifying that the buying and the selling pressures had evened each other out.

When the daily moving average and the RSI’s position are considered, a bullish market for the coin can be expected in the short-term. When the price breaks out of its press time price pattern, the immediate resistance for the coin will be $229, followed by $234.

Your feedback is important to us!

Is it Safe? How do 3Commas works?

Apple Card Officially Launched In the US In Partnership With Goldman...