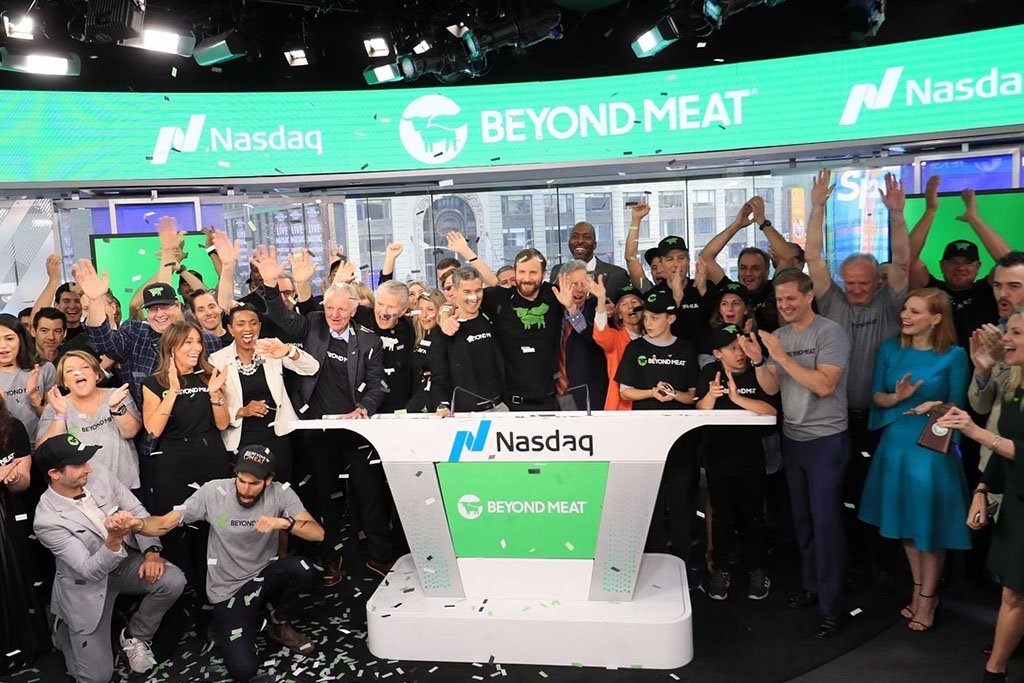 Beyond Meat announced that they will price its secondary offering of shares at $160, which represents an 18.6% discount to the closing price of the stock but is more than six times higher than the price charged less than three months ago.

Beyond Meat is offering 250,000 shares and existing stockholders are offering an additional 3 million. Some may see this move as a way for early investors to cash out on the stock’s huge rise since its IPO in May. From then, Beyond Meat stock was up 686% percent since listing as a public company.

Early investors such as Kleiner Perkins and Obvious Ventures and Chief Executive Officer Ethan Brown took profits after an almost eight-fold gain since the stock’s debut. Shares however recovered back on Wednesday, erasing some of Tuesday’s 12% plunge, to trade $196.51 each. However, on Thursday it kept going downwards as much as 12% to $172.

Analysts, however, think that there is no reason for fear. The offload that’s done represents only a small bit of their holdings (totaling 3 million shares) and also, the company is putting up towering growth numbers which really makes it look like they underpriced the shares at the IPO.

Let’s also not forget that the insiders were released from their legally required six-month-long lock-in period.

However, in June, JPMorgan‘s Ken Goldman downgraded Beyond Meat to a “neutral” rating. He then said that any hiccup in performance, real or perceived, could lead to a meaningful correction in the share price.

In a more recent note, Goldman reiterated the neutral rating because of Beyond Meat’s opportunity for growth, its management team, and ability to beat Wall Street’s expectations in the near term.

From the company, they say that they want to raise $40 million from the new shares, before the cost of underwriting, commissions, and the offering. The earnings will be used to “increase its production and supply capabilities, to pay for marketing and promotional activities, and for general working capital purposes”.

It is pretty unbelievable that stock went public at $25 in May and since then increased more tenfold in the time frame of just about a quarter.

Be it as it may, it seems that Beyond Meat could become the leading brand in plant-based food which could replace real meat consumption. Nowadays consumers want to eat and live healthier, they care more about animal’s good being and want to have some impact on the environment.

If this appears to be correct, the company could face a $1.4-trillion global market with its alternatives for beef, pork and poultry, primarily with their already famous ‘Beyond Burger’ that has been available at more than 53,000 distribution points by now as the demand for plant-based meats is clearly very strong.

Beyond Meat attracts a constantly growing list of restaurant and now is expecting at least $240 million in revenue this year, that’s almost triple 2018’s total.

Latest announced partner is Dunkin’ Brands Group Inc., which started testing their ‘Beyond Sausage’ breakfast sandwich in Manhattan before a planned nationwide rollout. Beyond Meat products are also on the menu at Tim Hortons, TGI Fridays, Carl’s Jr. and Del Taco.

Constantinople Ahead: What You Need to Know About Ethereum’s Big Upgrade

These 4 NFL Teams Are Either in Salary Cap Nirvana…or Hell...

Jerry Jones Is Not Wrong With His Stance on National Anthem...

Is Bitcoin moving from being ‘uncorrelated’ to ‘untethered?’